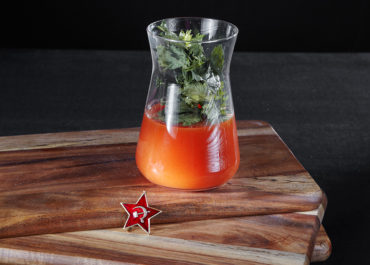 Nestled within the heritage stonework of Quelltaler House is Red October, from the owners of nearby Bibliotheca Marina Tazhdynova and Roman Tazhdynov.

Modern Russian food trends and local South Australian produce come together in our creative menu, which offers delicacies such as venison carpaccio and Ajika pork as well as chicken Kiev and Russian honey cake. For the utmost indulgence, try the black caviar served with a glass of French champagne or premium Russian vodka.

Late night snacks include dishes such as herring or sprats served with our own house baked Borodinsky sourdough.
Or try our Russian dumplings inspired by regions of the former USSR, such as khinkali (Georgian potato, cheese and chive dumplings) and chebureki (filled with pork and Russian sauerkraut, a popular Middle to Eastern Russian street food).

Sample local and interstate brews poured straight from the tap, or Russian beers by the bottle – with or without a shot of whiskey. There’s also a range of specialty USSR-themed cocktails with names such as Trans-Siberian Espresso, Honey I’m a Spy, Eye of a Taiga and USSSour, and a wine list featuring a selection of Australian varieties. When you’re finished, an inconspicuous doorway beckons you down to our atmospheric underground Asian-style speakeasy Suzie Wong.

> Creative interpretation of Modern Russian cuisine with an Australian twist.
> Russian bread, pickles and ferments made in house.
> Russian beer by the bottle, wine and specialty cocktails.
> Hidden underground speakeasy.